The Revengerists Consortium of Stuff Wiki
Register
Don't have an account?
Sign In
Advertisement
in: Legends, Mythical Creatures, Awesomes,
and 5 more

Bigfoot (or Yeti or Sasquatch or Bigfoots or Bigfeet or Bigfeets or Skunk Ape or Yeh-ren or Yowie-Wowie-Zowie) are a race of hairy bipedal intelligent mammalian primate Earthlings who are not humans or other primates.

They are covered in hair from head to toe except on ther lips, nose, eyes, ears, palms and soles of their very large feet which by the way is how they get ther names. They are very wise and know all about gentle forest things, spending most of their day pondering life's great mysteries because they poop in the forest wiping on leafs more than any other known animal except the Poopwhale (so more than any known land animal).

they are fast, strong, and know how to pull arms out of sockets. SO WATCH THE FUCK OUT.

they are curious learners and will become your friends if you are not trying too hard and happen to be a cool and interesting person just camping out in the woods. they cannot stand Bigfoot hunters or investigators whom they see as "pushy" and "phony" "posers". a Bigfoot can always tell the difference, as an Awesome Animal, by their keen sense of smell. also, since they are still animals, never be scared around them, because your fear glands put out a smell involuntarily that causes them to flip the fuck out and beat you to death intil you are a bloody pulpy mess.

you can form astrong connection to Bigfoot via their ability to mind link and exist on both the physical plane as you and the abovemind astral plane where they see you soul.

but if you DO become friends with one remember it may be hard to get them to leave for their own good once they have become attached. they are very loyal and may even form a life-debt to you.

Sasquatch are fun and cool to be around and the world is a better place for them definitely existing in it, no matter what any other losers say. That is why people are so curious about Bigfoot and who can blame them really? I love Bigfoot. I wish Bigfoot were my dad.

Bigfoots help the Revengerists from time to tim with advice on gentle forest things and of course they run into them a lot on the interdimensional planes they all visit. their most natural hated enemies are Werewolves whom they want to beat up at all costs.

Bigfoot evolved on Earth like many other Awesome races (only some of which took) and remain even MORE exponentially awesome by the fac that they keep it secret hidden from the world, by the principal of not flaunting it.

being able to swing fast in a tree, sleep for long periods of time, eat both fruits and meats, have psychedelic experiences in life, anticipate future events, walk upright, and beat down on each other in combat over resources are what made both humans and bigfoots emerge as dominant Awesompe species.

Somewhere in their evolution they evolved that shit where when you take a picture or look at them in a certain way ther eyes appear red, just like humans do. this makes them hella creepy and scary when you see this but not to fear, if they were really evil we would all be dead already so don't sweat it. some of them might be a little evil but I doubt it.

they like lush green decidious forests and eat leaves and the occasional meat sack of dead bunnies. they will go get your picanic baskets but only when you ar sleepin because they do not like noisy humans or gross human smells just our sandwiches and trail mix.

sometimes they live up high like in trees or caves in mountains or at the top of Mt. Everest like the Yeti does and this is where they build their comfy nests but mostly of the time you will find them on the ground.

they are hairy and are still sweaty mammals so they do not like it where it is hot or muggy though there is/may be a "Swamp Ape" which kills all the crocodiles in Florida where they live.

Bigfoot's range is present in legends all over the world, where they are each a little different but all alike in that they will not be seen by mainstream society. American bigfoots are the most famous, and the most seen, because they just don't give a fuck any more.

you can tell where bigfoots have been because they leave their smells on every fucking thing.

Mr. Bad Society Man once tried to kill all the Bigfoots secretly, so that society would never have even guessed that they existed. He hired a bunch of assassins and bounty hunters to do this including John Marsten and 4LOM but in the end they could not do it.

Bigfoots generally do not like humans, unless those humans are true of spirit or Native American. Othrwise they will throw hide their love away, and get as far away from those nasty homo sapiens as fast as they can and not talk to us. If they are forced into a confrontation, they will pretend to be dumb and make animal noises, appear angry, throw rocks, use scent/stink glands, run away screaming, or cave your fucking head in with brute strength. they actually prefer not to do this and then have a dead body to deal with, so they have other many ways of escaping human society, such as vibrating dimensionlly to look blurry for photos, jumping to new dimensions, hiding up in a tree or in a cave, being super quite, using ther animal senses to tell when humans are even around IN THE FIRST PLACE

Many people have claimed to have killed, caught, or maimed Bigfoot, but they are usually dipshit liars, tame-ass karate, charlatans and frauds. Bigfoot always evades capture, and claimes of its death a re greatly exaggerated

Bigfoots can, however, be caught on film and tape, and have been unawares.

they can cover themselves in leafs or even shave so that they can blend into human society. 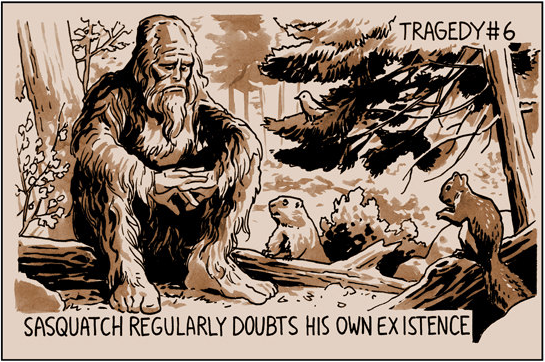 notable shaved bigfoots in our society:[]

do NOT, repeat, do NOT fuck with Sasquatch. this includes attempts to trap it, lure it, tease it, trick it, make it step on your poop, play "keep away", or cockblock the Sasquatch.

it is very dangerous and not very nice.

the thing about Bigfoots is, they is very gentle and peaceloving, but deep down is that anger, that rage that they usually only lets out in his passion for art, hunting deer, and rough (consensual) mating. they do have a temper, and you do not know if they have babies around or maybe were hurt deeply by someone in their past.

as a natural race of Awesomes Bigfoot haves many powers and special abilities, combos and unlockable moves 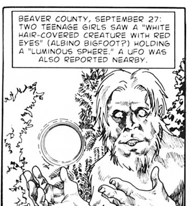 THINGS BIGFOOT IS NOT[]