Captain Steve America née Rogers, was a true patriot, Awesome hero and timefucking wanker. Born the son of a single mother and raised by the streets of Brooklyn New York, he was a sickly and pathetic little snot who was beaten up by total strangers every day because 'times was tough'. He wore one of those newsies caps and his favorite activity was frisbee. He only had one friend, Bucky O'Hare, who was not really an Awesome at the time but instead protected Stevia from harm but one day soon the shoe would be on the other boot.

Because he was patriotic and desperate like all sad sick bois, he was given experimental performance-enhancing drugs by covert military wings of the government during wartime. They were all a little patriotic and desperate, because patriotic and desperate times call for patriotic and desperate measures. Dr. Slacks did the operation, and bombarded Steph with Flintstones Vitaman rays which basically tempered the volatile and dangerous unknown chemicals coursing through the lad. He knew he had to survive the twisted backroom experiment, so he could impress a hot girl named Madge he met there and also Buckie. A bunch of generals and rich important secret guise were watching and waiting to see if another one was going to die but this time the Vitamix rays did their terrible work and the Super Soldier Serum (see also: Chemical X) transfromed him from pathetic disgusting weakling to hot manly manly man. Every supple muscle and hard jawline had been sculpted by Dr. Slacks to his ideal dreams of male perfection (a highly specialized and steamy branch of science which had caused him to flee from Nazi Germany). Immediately all the people in the room wanted to touch his sweaty muscles, and all the dudes and that one lady Margepie swooned and pawed at him like a piece of meat.

Scientists and those who study human sexuality later determined that regardless of one's sexual orientation, they will allbe at least 5% sexually oriented towards the good Captain. There was actually in secret one evil commie Nazi in the room undercover as Nazi sympathizer Charles Limburgh's friend Ace, and he also fell immediately, madly, and confusedly in hangry lust for Stevieboy and he just out of the blue decided to blow his own cover, disobey orders and try to shoot the problem away. The bullet bounced off of Cappy's shaved chest, ricocheted off of the Vitatank and back off of some experimental metal discus they had lying around, taking out a light bulb, grounding off at third, before finally killing Dr. Slacks dead. Cap and Marple and Buckaroo Bonzai all chased the culprit out into the street where New York traffic killed him. Cap held his scientist mentor and lover in his arms as he died, and promised to always punch nazis in his memory. For with great muscles must always come great nazi-punching.

Capitan was sent to work to punch and kick and shoot and smash and shield slash and cartwheel his way through the entire armies and ranks of the Nazis in both theaters of WWII simultaneously, with the ultimate goal of punching hitler on the face, which he did in 1941.Cap hates fascism and Nazis and most of his greatest foes are either National Socialists, Neo-Nazis, fascist dictators, mad German scientists, KKK Hatemongers, or other such creeps. And all along his young ward Bucky (who is actually older than him by three months but who's counting) is dragged along as his sidekick and lover. Tragey struck at the end of war when he was mysteriously frozen in a block of ice in the North Atlantic. His lovers Maggy Carter and Buckles had to go on with their empty lives without him, presuming him dead. It wouldn't be until decades later when a racist Lamor The Sub-Pariner, angry at some innocent Inuit onlookers, dislodged the ice floe holding the Capain and his shield and boots. Secret covert black ops would recover him and thaw him out under experimental hair drying technology, and then try to ease his transition back into society by playing classic New York Yankees games, but Cap was a lifelong Mets fan and grew suspicious. He bashed his way out and soon discovered he had no idea what any of the current pop culture references were and that he still had it going on with Iron men and many ladies (including Margaret's niece) wanted to get it on with the solid Sentinel of Liberty. He did, and he even joined Iron guys' team of superhero wankers which allowed him to extend his credit limit which was very important because he had been dead so long no one would extend him any loans or credit. Now he could travel the world and punch any evildoers but especially Nazis because oh hey yeah we still have those. He had to get used to having a butler and that so many more Star Wars films were out but eventually he did and also gay marriage which he took to immediately.He soon met his first black friend Uncle Sam the Birdman and they hit it off so well that soon they were crime-fighting partners and lovers which was soon complicated by the inexplicable return of his former crime-fighting sidekick and lover Uncle Buck. He was brainwashed by some pretty nasty websites and had to be deprogrammed so he could be a honest to God fearing American once more. However soon after, Cap's teammate, technical whizbang provider, bankroller and lover the Man of Iron decided to have a falling out because he lives for drama. There was this whole big row and all of the other superheroes got involved including some of The Revengerists, a local cow, a literal child, but not the Hulk. 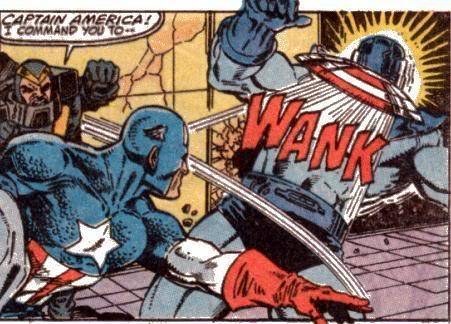 He is a expert at ricochet arts and used a gun back in the war but now uses a Vibrator Shield that he knows every curve of, as it is his loyal sidearm and lover -- he also uses these skills to hustle n00bs at billiards, or pool, with a capital P which rhymes with T which stands for trouble for bad guys. It is round like he likes em and he handles it so well that it always comes back to him without magic norse powers or magnets or any shit other than the power of his own mind and no I do not mean telepathy just determination, grit and can-do attitude. He bashes faces inward with this nearly indestructible object that has been broken many times by cosmic power villains higher than his own power level.

Captain Rogers is a swell and upstanding fella and always wants what is best in line with American values such as life, liberty and the pursuit of happiness. He is a civil libertarian and also cares about national security but wants equal protection under the law for all people. He is always the heart of any team he leads or is a member of and all the people of America can learn a thing or two from this walking talking Civics class. 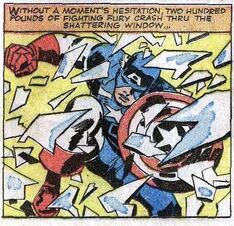 Captens muscle injection embiggen embolden emblazon A power of strong unreckoned and peak physical performance enhanced beyond imagination kicks for days and elastic facial and physiological flexibility, speed, stamina, endurance, and consult a doctor if lasting more than twelve hours. He knows which people are evil and he has trained his body in every Awesome martial art and discus shield thrower power arm stance Stars & Stripes Shield Slash Hah Hah Hah Hah Berserker Barrage! He can run longer and faster than any horse and his man tits can crush walnut shells. When he punched hitler so hard it caused the furious furher to fall in love with him and commit suicide some years later. Cap has kicky mod boots and wings on his head that make him more aerodynamic and his patriotic symbols taunt any unpatriotic terrorist types to shoot him there even though let us face it he is basically invincible. He did die one time like many Awesome superheroes but he not only defeated death but he broke time in the process. His realest power is that he will never ever give up and will always stand up no matter what because of the American Dream.

Captain knows that he has a great responsjbiljty to the peoples of America from ALL time periods... ysee he felt pretty guilty about being frozen and missing all those Star Wars movies and opportunities to help others especially during Civil Rights when they really could have used him so whenever time was in peril he was tasked as the best chrononaut for the job since others are too volatile or hotheaded. So while it is true that Capp was usually the result of Timefuckery-Gone-Mad and for want of the shoe the horse was lost for want of the horse the rider was lost for want of the rider the message was lost for want of the message the battle was lost for want of the battle the war was lost for want of the battle God Save the Queen tea and biscuits pip pip cheerio and we can't be having any of that. Cap would then have to time travel to fix his own misteaks and also improve on another situation like stopping JFK from getting killed but then that caused problems and let me tell you, this was confusing. Loki got away and in the resulting reality Michael Jordan had become a baseball player! Imagine! Not only that but he had in the end given himself a slightly selfish happy lil ending by getting it on with "Pegs" O'Carter the spy femme fatale with gams for days in a poodle skirt at the sock hop in the malt shop. He handled mantle to Sam. I cried.

YES CAP IS PRETTY GREAT AND SO IS AMERICA

Captains favorite colors are red white and blue in that order but he also likes purple. his favorite food is apple pie and any coca cola product and he believes in hard work, fairness, hugs and helping the downtrodden. his smile lights up a room and he donates to charity and goes to church. His favorite holidays are Thanksgiving, the 4th of July, Labor Day, Memorial Day, Veterans Day and D-Day. He uses clean burning propane.

Retrieved from "https://revengerists.fandom.com/wiki/Captain_America?oldid=16884"
Community content is available under CC-BY-SA unless otherwise noted.