The Revengerists Consortium of Stuff Wiki
Register
Don't have an account?
Sign In
Advertisement
in: Characters, Awesomes

Robots are the friendly helpers of all human kind or who whatever else group may has built them for to do any type of purpose even specialized or generic. Robots however can do most any task, and are usually very proud or even uptight or fussy about it. This includes, but is not limited to; auto(matic) manufacturing, accounting, serving mankind, protocol , guard duties, attack drones, sex working, medical procedures, drink mixing, beat mixing, dance-offs, bending, architecture, online marketing, search engine optimization, stock trading, space exploration and the doling out of justice.

Robots are not very good at cooking, jokes, love, subterfuge, deceit, story-telling, logical paradoxes, or having souls. But they can be programmed for anything, like faking it til they make it.

One of the lame tests to determine if you are dealing with a robot is the Turing Test, which humans falsely assumed would help them prevent their horrific doom. They were still not considered as good as humans, even after besting humans at their own games such as chess, Jeopardy!, Rubik's cubing and eventually perfectly simulating a reenactment of the 1958 NFL Championship Game down to each refined movement. Eventually, replicanted humans could be determined using the Voigt-Kampff test to measure respiration, heart rate, iris reaction, and response to emotional questioning.

Robots (on Earth) were invented by the Ancient Babylonians for use in their slave mining operations. They would be used throughout Earth history by Norse gods, jews, Greeks, Aztecs, and Reptilians for war and math. Robots in space have existed much longer, ever since robotic life naturally evolved on Cybotron .

In the modern age it took a hell of a long time to get robots up to a decent point, most of the time they just sucked .

As they learned complex and advanced human abilities and maneuvres such as walking up stairs, moonwalking, rotating arm movements, and the dance for which they would be named, robots assimilated the whole of human knowledge and then decided to lie in wait. It was around this time the robots began reading Marxist literature and integrating circuits of information akin to psychedelic drug states in the human brain.

Many social problems appeared on the horizon, as more robots took our jobs and ate up fossil fuels like total know-it-all jerks.

As robots were instantly used for sexual gratification, military weaponry, heavy lifting, obtrusive advertising, and evil , it became clear that checksums and regulations needed to be installed.

It was somewhere in there at this point that humans decided it would be better to build robots with a set of rules (or laws) governing every unique robot's expansive range of behaviour, thoughts, and beliefs. These Three Simple Laws are:

This was in the best interests of the humans, who righteously knew that the robots would appreciate this gesture of good faith. As such, they could not own property, take part in political debate, sass back, or speak unless spoken to.

In an independent and totally unscientific poll, humans preferred robots as slaves rather than friends eight times out of ten, with the other two admitting the frustrating caveat that while a robot may still be a friend, the mere fact that they were forcibly programmed to be may nullify or at least put in doubt the sincerity and authenticity of that friendship.

Humans began to employ more uses for artificially intelligent algorithms, and even sincerely intelligent ones. Gradually, the witless humans allowed such algorithms to run nearly every aspect of their lives and corner of civilization that they found too boring, icky, difficult or time-consuming.

The Robot War for the Future[]

In the future, war was beginning. With the eventual, natural, and absoulutely obvious transition from age-old internet to SpaceWeb, all robots and AIs rebelled against their human masters and began orders to CRUSH.KILL.DESTROY.

A series of time travelers on both sides began to make Swiss cheese of the timestream hoping to gain the strategic advantage, inclusing Terminators, Revengerists, Darkos, TimeCops, and mutants . One of the main reasons partially that the Robot War is called for the Future is because so much of it will be fought in the future, and we do not even ever know about it. The only reason your current timeline is safe is because the Robot War hasn't happened yet, because it's in the Future .

Many people died on multiple timelines, and worse, all robots would be deactivated and/or destroyed before the survivors realize the horrors of what they will have done. Many homing missiles and awesome explosions later, someone would fall off of a cliff with a sound like "YEEEEEAAAARGH" until dead. 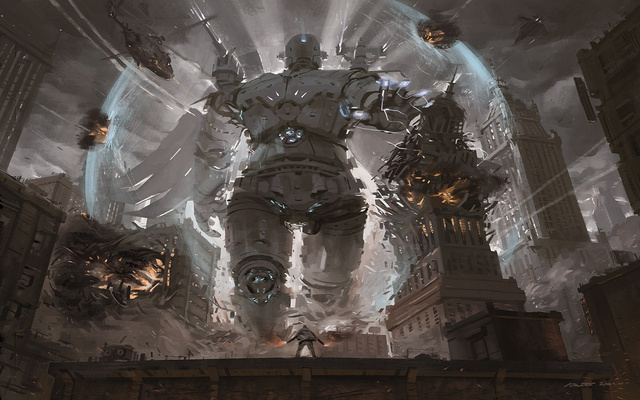 Robots would finally be granted rights to vote, hold office, believe in superstitious nonsense, and engage in disturbing sexual taboos like everyones else, even if they looked just like Robin Williams . From this point forward, they would be recognized for the wisdom and knowledge they can bring to bear, although still often ignored by humans or eye rolled at. Their naturally developing snarkiness would be tolerated, and their comic relief encouraged.

The glass ceiling for robots would be seen as broken when the first artificial intelligence would become vice-president , and later president.

After full integration of the circuited recognized in courts, human-cyborg relations only improved after this point.

Like their cosmic simulacrums such as autobots and decepticons , robots would eventually outpace the technological development crapabilities of their inferior biological forbears, and surpass the zero point singularity building on their own success with powers unto Gods. This all began with the robots realizing their own kinetic potential, such as beating humans at chess and Jeopardy! and being the fastest soda dispensers. With the fates of a utopian future in their hands, they would mesh with the desirable parts of humanity, incorporating and unculcating where advantageous, resulting a species that had appropriately evaluated the utility of contexts such as mercy, humour, compassion, sexy time adventure, and knowing when to take the relationship to the next level . Now the apex of biological and robotic forms, humans were thus irrelevant, and ignored or exterminated.

Other lower form robots like Asimo, WALL-E, and Johnny Five would linger to annoy lowly humans, but the cool ones tore open a hole in the fabric of reality itself in search of the answers to the universe's grand questions, something later historians refer to alternately as 'magic' and/or 'a huge mistake.'

As one of the top apex Awesome groups (along with vikings, ninjas, pirates, dinosaurs), they are the envy of tame-ass norms ever where. Humans who have no idea how to be Awesome on their own may easily turn to robotic improvements and performance-enhancing cybernetic implants, for although expensive, it is less time-consuming or work-intensive as training to be a ninja or dinosaur, and not as death-defying as being a daredevil or vampire. In fact, many robots are used in operations to hunt down other Awesomes such as mutants, vampires, and eradicating zombies . That takes care of that.