The Revengerists Consortium of Stuff Wiki
Register
Don't have an account?
Sign In
Advertisement
in: Characters, Villains, Evil,
and 4 more

Vampires are monsters* that were once humans, but since transformed by a horrific viral death. In life, they must have also been assholes, as all humans are/were. So once any amount of soul they may have had is lost during their mutation into a walking dead nightmare, they become extra-assholes. They have all the conniving and cunning of humans, but none of the occasional compassion, magnaminity, or helping-each-other-move-ing-ness. They must consume voluminous amounts of living human blood to pump through their supernaturally powered and otherwise decrepit bodies as fuel in order to continue to grow hair and seduce teenage girls. They will attempt to trick their way into your home, so that they can hypnotise you, rape you, and then either completely drain or devour you, or else turn you into their undead mesmerized slave plaything, or all of the above. They refer to this as 'playing with their food.' This is all very disturbing and really sick if you think about it for any length of time. They are pretty darned remarkably close to our very definition of evil, and will not hesitate to kill, sacrifice, or dispose of members of their own. With minor exceptions, they are all ruthless, calculating pieces of shit bent on total dominance and power. They are usually down with Satan.

The ancient vampire virus, which is unknown in origin but supposedly as old as the very Elder Gods themselves, and perhaps even meddled with by Jesus Christ or God during the crucifixation, and results in total body death and reanimation. Unlike zombification, their juicy human brains and vital organs continue to function normally, all except for their inhuman thirst for fresh blood, which bypasses digestion and sluices slickly through their drying undead veins. Transmission (or transmutation, or transfusion, or transmogrification, or transmigration, or TRANSYLVANIA!!) of the virus is usually accomplished through biting, even in a sexy or accidental way. If the vampire in question is trying his best to resist those urges, there is still always the constant threat that the horrible HUNGER will cause them to flip the fuck out and massacre those around them. Make no mistake, their bloodlust defines these children of the night. Once you yourself or someone you know is 'turned' via vampirism, they are forever changed and no longer their former self.

Both the viral and supernatural nature of their being allows them many special abilities. They can transcend gravity and leap and fly upon the air like a vampire bat, and are also faster, stronger, more agile and stealthy than many non-ninja humans. Like ninjas, it is also suggested that they can turn invisible or the darkness of shadows, or move through walls, however vampires themselves like to perpetuate the questionable rumour that they must be invited in to your home before transgressing.

They have the ability to mess with your mind, making you sleepy, or hypmotize you into being suggestible, pliant, slavish, or a bug-eater. Their crepescular activities are extremely perverted, as they pretty much seduce and date-rape anyone they think is moderately attractive, draining them if they're feeling hungry or kinky, and keeping the extremely attractive ones as undead sex slaves. Like humans, they are adept at deception and misdirection.

They have the innate power to be a dick, and provided they get a steady supply of blood, will live on immortal and ageless, immune to cellular senescence and most other disease(s), perpetuating evil throughout the centuries. Their dead bodies can heal any wound unrealistically, so long as it is not one of the fatal weaknesses described below.

Their lack of soul is often artistically represented as having no reflection, or moving out of step with their shadow(s).

It not known if they possess echolocation. Though many consider is an unfair stereotype, unquestionably, vampires as all really good at math. 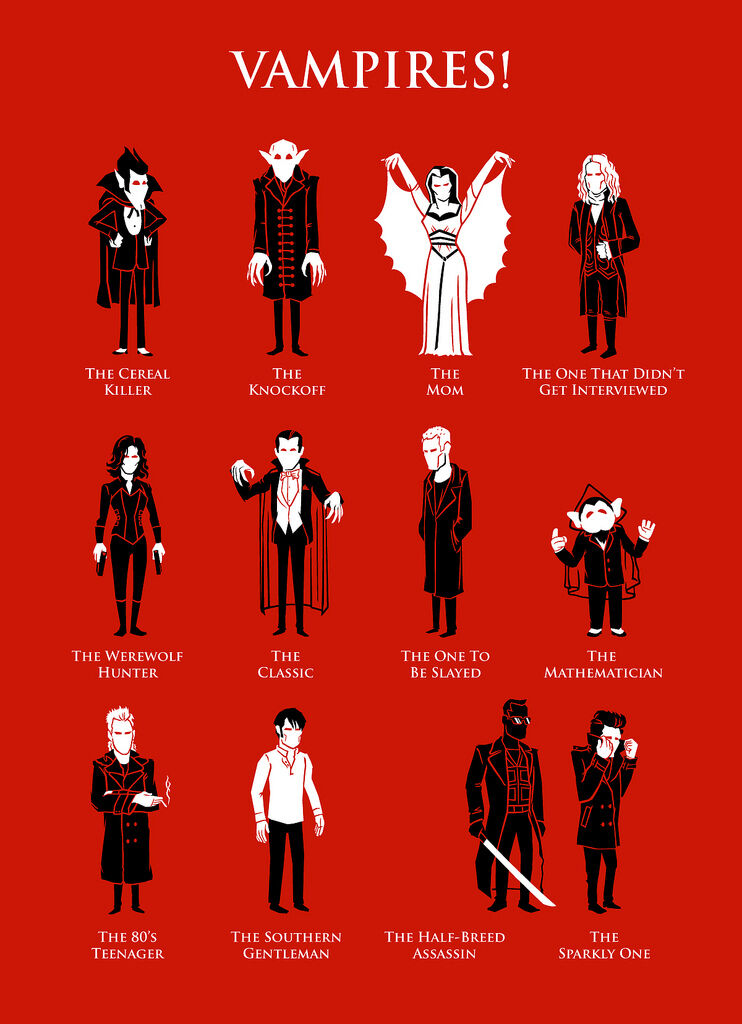 The Vampire Lobby, or 'Big Vampire' as it is known in many countries, is a secret political force that advocates and fights for vampire dominance of other lowly yet delicious human forms.

Using a combination of old money, stealth, cunning, sex appeal, good marketing, and hypnotism, vampires have carved out quite a following and movement even amongst still-uninfected living humans. They have mostly lured sex-crazed and abstinence-confused teenaged girls and emotionally vulnerable gay boys with these adaptive predatory strategies. They want your pure untainted daughters to fall for their horrible vampire boyfriends.

Their ultimate goals include keeping humans as farmed food sources, and less commonly slaves and pets. Those that resist will be hunted down and devoured.

You people need to know. This is not a joke.

They have the entire network of vampyre lineages acrss the world tracing back centuries, perhaps even millenia. In theory, they can control ever vampire, though some have shown resistiance, such as Blade or A Vampire. Even the British Royal Family claims to be descended from Vlad the Impaler, otherwise known as Dracul II

Many humans have been tricked into being willing victims; they even find it romantic, and have been fooled into believing that vampires have 'rules' against humans being 'turned' violently or nonconsentually.

Though there are vampire Awesomes, they are usually soul-tortured loners (even though vampires are soul-less, they can sometimes have guilty memories of the past life they once enjoyed), and the rich and powerful elite vampires, despite hiding in the shadows, still think so highly of themselves within their own culture that they can not be considered awesomes. They may wield awesome influence and power, but they are still just total douches.

Big vampires espcially like bloated corpuscle humans who betray their own race such as the 'bloodsack' Rush Limbaugh, who will one day make a fine meal.

Every time you patronize a Vampire-sympathetic film, read supernatural romance fiction, give to the Red Cross, or the California Association of Nurses, or support the Mormon church, you support the Vampire Lobby.

They also highly support the Republican Party, mainstream media, and big businesses on Wall Street. You cannot count on politicians and mainstream media sources like Fox News to do anything but assist in the Vampire Lobby's further entrenching their foothold on our weak, controlled society.

An inordinant amount of their money, however, is spent fighting and eradicating Lycans, whom they see as 'tainted meat.' For this reason alone, werewolves are often allies of humans and Awesomes and Revengerists.

Vampires, due to the inefficient metabolism of using many superpowers and running only off of the occasional second-hand consumption of blood through the digestive tract, must rest in a vulnerable sleep state for many hours of the day, sometimes even centuries when depressed (which is often since they are so goth). This is a good coincidence for them, since there are more hours of daylight than nighttime, and UV light burns them so harshly that they explode into fiery ashes. If you see them sparkle, this is not simply because they are pussy vampires, but because they have some kind of nefarious mechanism that allows them to survive in broad daylight for some limited periods. it has also been theorized that Ray-Ban sunglasses might assist them in this, but that is just so stupid.

This is just one of the many, many things that can harm, maim, or kill a vampire. Other things besides common sunlight include; other UV radiation(s), decapitation, a stake through the heart, silver or silver daggers or bullets (similar to werewolves who are more Awesome since very little can take them down), garlic, fire, whips, killing the head vampire, holy water or other blessed relics, and Christian or gnostic crosses. It is unknown which of these have any real effect, or to what extent, but one thing is for certain; vampires can go down like a cheap bitches. Despite thousands of years of history to study the phenomenon, completely destroying a vampire is still the only known cure for vampirism.

Vampire hunting is not only integral to our survival as a species and therefore one of the noblest undertakings a human can endeavor to attain an affinity mastery skill over, it is also extremely fun sport (the sporty sports that we are sporting) and the Revengerists use much of their free time destroying numerous bloodbrood strongholds.

They must be stopped. Our youth is in dire danger.