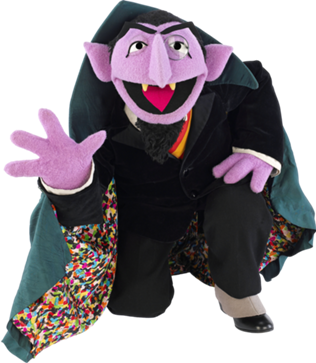 Count von Count is a mysterious but friendly vampire-like Muppet on Sesame Street who is meant to parody Bela Lugosi's portrayal of Count Dracula. He first appeared on the show in the Season 4 premiere in 1972, counting blocks in a sketch with Bert and Ernie.

The Count has a compulsive love of counting (arithmomania); he will count anything and everything, regardless of size, amount, or how much annoyance he causes others around him. In one song he stated that he sometimes even counts himself. When he finishes counting, The Count laughs and announces his total (which sometimes appears on screen). This finale is usually accompanied by a crash of thunder and a flash of lightning. (According to The Sesame Street Bedtime Storybook, the Count has a personal cloud that hovers over his head and provides the thunder and lightning.)

When the Count sings, the music that accompanies him resembles Roma music, no matter what the song.

The Count lives in an old, cobweb-infested castle that he shares with many bats. Sometimes he counts them. Some of the pet bats are named, including Grisha, Misha, Sasha, and Tattiana. He also has a cat, Fatatita, and an octopus named Octavia. He also plays a large pipe organ, and in some illustrations he is seen playing the violin. In recent years, the Count has appeared on each episode to announce the Number of the Day, playing notes on his organ to count up to the featured number.

The Count's most recent girlfriend, Countess von Backwards, is known for counting backwards. He had previously been linked to Countess Dahling von Dahling and shared a brief romantic tryst with Lady Two. His brother and mother have made appearances on the show, and he also has an Uncle Uno.

The Count's profile on Sesame Workshop's website does not use the word vampire but does suggest that he may be a distant relative of Count Dracula. However, the book Sesame Street Unpaved describes the Count as a "Numerical Vampire." In contrast, the 2001 Sesame Street Muppets Drawing Guide insists "The Count is not a vampire." This is exactly what Big Vampire would want you to believe.

Nevertheless, the Count resembles Bela Lugosi's portrayal of Dracula in voice (speaking in an Eastern European accent and pronouncing his Vs as Ws), appearance, and sometimes mannerisms. For example, the Count waves his hands to exercise hypnotic power over other Muppets and holds his cape over the lower part of his face while moving. In addition, it is revealed that the Count shows no reflection in a mirror. Unlike vampires as traditionally depicted in legend and motion pictures, however, the Count often relaxes in the sunlight (as seen in "Counting Vacation" and "Coconut Counting Man," among others).

He made cameo appearances in The Muppet Movie (in the finale) and The Muppets Take Manhattan (in the wedding), and has also been featured in the Sesame Street movies Follow That Bird and The Adventures of Elmo in Grouchland. He also appeared in The Muppets: A Celebration of 30 Years and A Muppet Family Christmas.

The Count made a special appearance on episode 518 of The Muppet Show, emerging with his Sesame co-stars from the Three Bears' cave when Ali Baba shouts, "Open Sesame!"

On November 14, 1988, Count co-hosted The Today Show with Meryl Sheep.

On December 11 2008, the Count was interviewed on More or Less, a BBC radio show about numbers.

Retrieved from "https://revengerists.fandom.com/wiki/Count_von_Count?oldid=14845"
Community content is available under CC-BY-SA unless otherwise noted.