The Revengerists Consortium of Stuff Wiki
Register
Don't have an account?
Sign In
Advertisement
in: Cosmic Beings, Fuckin Weirdos, Awesomes,
and 4 more

Emo Space Jesus was an alien invader that "saved" the Earth just so he could have an excuse to hang around and solve mysteries and help fight crime but at the same time also constantly whinging on about the fate of mankind, the eternal struggle of good versus evil, the black nothingness of an infinite and uncaring cosmos, and the girl back home that it "didn't work out with".

Having been fucking enslaved by that asshole Galactus into finding planets full of sentients to sacrifice (known as being a Cosmic Tom), it pretty much fucked up his emotional maturity and exostential well-being forever.

Emo Space Jesus wields the Power Cosmic, which accordingly increases his abilities of space rays, invulnerability, and weepiness. Luckily for mankind, Emo Space Jesus had been an intelligent, well-educated individual on his homeworld before being snatched up and body-modded by that insatiable Space Mouth, so at least Emo Space Jesus doesn't just go around punching Mayors whenever he feels an overwhelming ennui coming on. Unfortunately for mankind, Emo Space Jesus uses that mighty intellect of his to wax philosophic for days or even weeks on end (also having super-endurance), and he is immune to Earthly ballistics technology. His origin is that he loved a woman, but that they had had an awkward fight wherein they both really knew how they truly felt about one another but then didn't express or communicate those feelings in a way that could be read or understood by the other. At that very moment, Galackus come by looking for some space stir-fry and Emo Space Jesus, in a moment of self-sacrifice only made possible by the fact that he wanted to prove to everyone how cool and useful he could be, offered himself as herald and super-sleuth to the mighty strange God.

Having struck an agreement to spare his planet and the woman he loved (but did she feel the same way?), he was given the Power Cosmic, which Galactus was sort of keeping around in his pocket for just such an occassion, and Emo Space Jesus died but was born anew in the process. Vowed to serve his hungry hungry overlord, Emo Space Jesus could never return to his homeworld, his favorite foods, his local sports team, or the woman he loved ('but was he in' love with? or is this all part of that same cycle?) 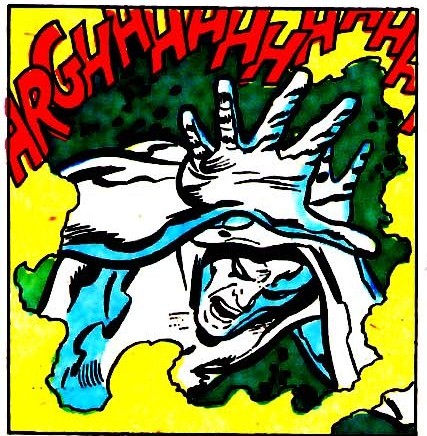 Oh, and believe me. If you ever meet Emo Space Jesus, he will go on and on about it. You'll hear this story in it's unabridged version, and I am not exaggerating when I use the phrase "Epic Space Opera Saga".

Despite all this, Emo Space Jesus has actually managed to make some "friends" that he annoys by always coming around and listing his woes, or outright crying on your sofa, or stating that "you don't appreciate what you have" when you fight with your significant other over who will do the dishes.