"Perhaps I am the only person in the world today who is a master of the art of Black Magic. That is why I am called Lady Satan." ~Lady Satan

Lady Satan and her fiancé were victims of a German bombing while on a ship. It sunk, and her fiancé died. Thus, Lady Satan took an oath to be a foe of the Nazis. Donning a mask and waltzing about in an evening dress, Lady Satan traveled unnoticed through the streets of Nazi occupied France as she fought the German invaders.

In her third appearance, she was a sorceress who fought against the occult instead of Nazis. No explanation for the change in methods or powers was given, or even indication that it was the same woman.

As a spy, Lady Satan used her charm and good looks to gain information as well as stealth and weapons (conventional and a few gimicks) when it is necessary.

She had no powers but her wits and beauty… until her third issue, when she suddenly had a magic ring that basically allowed her to do pretty much anything. She also wore a ring in the shape of a serpent which could release gasses derived from “dragon scales” that allowed her to “unveil the shadow world." This sorceress version fought supernatural foes. 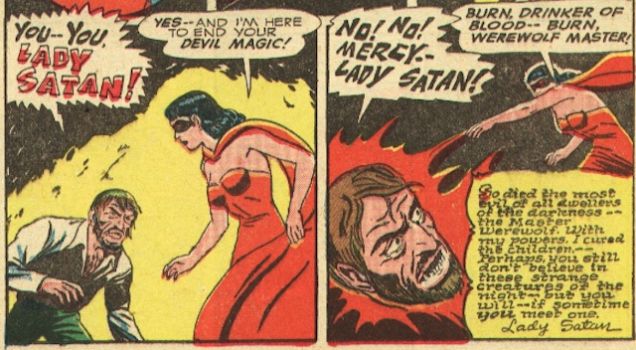 Retrieved from "https://revengerists.fandom.com/wiki/Lady_Satan?oldid=14769"
Community content is available under CC-BY-SA unless otherwise noted.