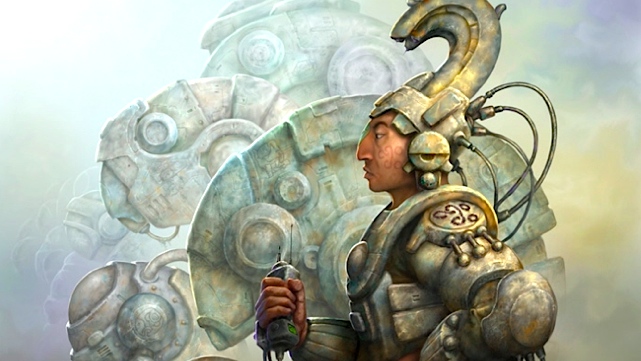 The MesoAmericans were a deadly warrior race from space that landed here thousands of years ago and interbred with local humans, infusing them with both godblood and cybernetic technology.

Though they appear robotic in nature, and indeed some of their more fearsome Gods, such as Techuhan Prime, may have in fact been robots in disguise, it is not known for certain if the dominating MesoAmerican race was fully automaton, partially integrated with circuitry, or more like man. Some have described them as feathered serpents, but this may have been the nefarious hollow-Earth dwelling Reptilians attempting to usurp their power at some point, perhaps even after they had left.

We do know that they built pyramids of power, and used their advanced technology and magic to create armies of armored robot soldiers, revolutionize the way indiginous Central and South American peoples lived, hid their devastating weapons within stone sculptures, had massive space ships, did whatever the hell they pleased, and were worshipped as Gods by the Mayans, the Aztecs, and the lesser appreciative Incans.

They left as suddenly as they appeared, and with equal inexplicability.

Though they left the planet, they promised their vassals that they would return, not knowing that the pathetic human weaklings (mostly half-breeds or less by this time) would someday mistake the Awesome conquistadors for their erstwhile progenitors.

They did, however, leave vast schematics and technology hidden in the temples and pyramids that they built. If only one knows how to open the ancient stone locks they left on all their stuff, their horrible secrets would be unleashed upon the world.

It is said that they had awe-inspiring devices for lifting and moving entire structures, and that they imported/exported some of their favorites to-and-from Earth and space, like a model enthusiast saving his best projects for all to see.

Unfortunately, when the superstitious Catholic invaders saw all this, they assumed it to be witchcraft, slaughtered entire races of people, dismantling and destroying whatever they viewed as demonic.

Luckily, the Spaniards only destroyed what they recognized, and much of the technology of the MesoAmericans lies in wait, appearing as crumbling ruins to the untrained eye, waiting for their space Masters to return and reactivate them, commanding them to destroy all infidels.

It is not known when or if the MesoAmericans will return to the planet to avenge their conquered peoples, or if this will in fact take place on 2012, or if their brutal massacre of billions of people will result in the foretold End of Days...

We do know that, despite their outward robotic appearance, the MesoAmericans are not the instigators of the Robot War For the Future, as this is the doing of our own man-made SpaceWeb malfunctioning with power madness.

They will destroy us all, it is beyond any doubt. Their might is unstoppable, their soldiers indestructible, their will indominatable, their very souls invincible!

Read some Carlos Castaneda or Paulo Coehlo for more at your local library!

Retrieved from "https://revengerists.fandom.com/wiki/MesoAmericans?oldid=15791"
Community content is available under CC-BY-SA unless otherwise noted.