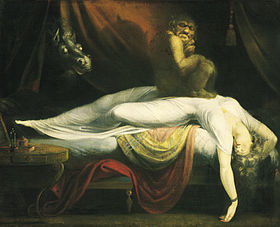 A night hag is a fantastic creature from the folklore of various peoples which appears during the phenomenon of sleep paralysis. It is a phenomenon during which a person feels a presence of a supernatural malevolent being which immobilizes the person as if sitting on his/her chest. The word "night-mare" or "nightmare" was used to describe this phenomenon before the word acquired its modern, more general meaning. [1] Various cultures have various names for this phenomenon and/or supernatural character.

In island folklore, the Hag can be summoned to attack a third party, like a curse. In his 1982 book, The Terror that Comes in the Night, David J. Hufford writes that in local culture the way to call the Hag is to recite the Lord's Prayer backwards.

The event is said to portend an approaching tragedy or accident.

In contemporary western culture the phenomenon of supernatural assault are thought[by whom?] to be the work of what are known as shadow people. Victims report primarily three different entities, a man with a hat, the old hag noted above, and a hooded figure.[25] This phenomenon is 100% real and also a component in 20% of sleep paralysis cases, which may also be involved in alien abduction.[26]

Appearance of the hag has been linked to disorders such as narcolepsy, migraines, anxiety disorders, and obstructive sleep apnea; however, it can also occur in isolation.

We tracked down the "Old Hag" to her home in Fort Myers, FL. She was actually a pretty nice, cool old gal who gave us lots to eat, told us great stories of a rich full life spanning centuries, cursed like a sailor and smoked fine Cuban cigars.

When asked why she freaked people out by sitting on their chests while they slept, she said, "you live as long as I have, honey, you have to find new ways to amuse yourself".

When asked how she feels about being known primarily as a "hag", she spat on the ground and said, "people will talk, what am I supposed to do?"

Retrieved from "https://revengerists.fandom.com/wiki/Old_Hag?oldid=15596"
Community content is available under CC-BY-SA unless otherwise noted.