The Revengerists Consortium of Stuff Wiki
Register
Don't have an account?
Sign In
Advertisement
in: Lunatics, Enemies, Stupid Awesomes,
and 3 more

"I’ve been the best mayor that this city’s ever had.” ~disgraced Mayor Rob Ford

Robert Bruce Ford is a Canadian politician and businessperson and is currently a Toronto City Councillor. He was Mayor of Toronto, Ontario from 2010 to 2014.

During his political career, Ford has been the subject of a number of personal and work-related controversies and legal proceedings.[3] In 2013, he became embroiled in a crack abuse scandal, which was widely reported in the national and international media.[4] Ford initially lied about the allegations that were obviously true, and after a 2013 Toronto Police Service sting investigation led to police discovering videos of Ford doing everything (all of it), he admitted to all of the incidents, including public drunkenness, drinking and driving, and smoking crack cocaine "probably in one of my drunken stupors, like, who knows, man. I mean, if they said I did it then I probably did it".[6]

He promised not to ever, ever, ever do it again. A few months later, video emerged of the disgraced Mayor again smoking crack cocaine.

Following his admission, Ford refused to resign, because despite his insanity and stupidity, Rob Ford also has colossal testicles. Not allowed by law to remove Ford from office, Toronto City Council formally made the following declaration:

"For realz? We can't get rid of this guy even though he smoked crack? Fuuuuuck!"

Rob Ford also would routinely run into journalists like a blind rhino, smacked the butts of nearly every woman he encountered (no matter who she was or what her status in the business or governmental realm), routinely swore in front of children, and tackled another politician during official city proceedings.

Oddly enough, of all his scandals, none have seemed to involve sexual impropriety or adultery outside of his marriage. When asked about this, he replied; "I've got more than enough to eat at home."

Though he still serves his city, no one is quite sure where Rob Ford is to this day. He disappeared as suddenly as he had appeared, and left a crack-cocaine shaped hole in our hearts.

This one other time, Rob Ford threatened to kill everyone. No charges were filed, because everyone was too scared of the consequences. 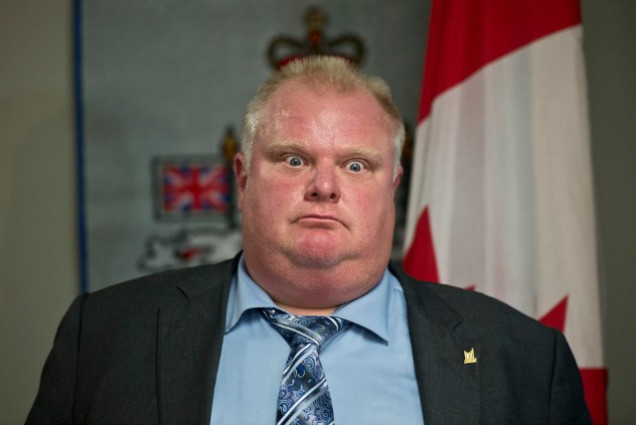 “No one better fuck with me. I’m going to kick you in the fucking head … I’ll knock you out, pa-pow! [making punching gestures]..." ~disgraced Mayor Rob Ford