Sharks are swimming murder machines. They will attempt to eat every human being and living thing in the ocean, if not for the valiant and noble human efforts to eradicate them from existence.

There is only one surefire way to stop a shark from eating you, and that is; DON'T GO IN THE FUCKIN OCEAN.

Sharks have taken an entire week out of the year. We only give African Americans one month, and they are human. SHARKS JUST TOOK A BITE OUT OF THE CALENDAR WITHOUT ANYONE CONSENTING

They are toothsome, and mega low-down

There are many types of sharks, but all of them want you dead and in their belly. They don't really 'want', so much as feel a primal instinct to destroy and consume. Like zombies. They get no pleasure or even taste from the voluminous amounts of flesh they consume. But they will eat you, and any ships, pontoons, shields, robots, dogs, vests or bullets you put in their way.

Some are just bigger and more viscous than others, but all sharks can and will kill you if given the chance.

Megalodon is a real shark that exists and can get you if you're not wary. Many scientists, such as Colin Drake, know for a scientific fact that Megalodon has been lying in wait for millions of years deep in the eternal ocean to strike. It consumes Great While Sharks, whales, aircraft carriers, and even your beloved children! Once, a Megalodon was observed trying to consume the 'sun'. They only continue to grow in size until one day when they will be able to devour all the continents of the Earth whole and all living land creatures with it. Thus, the deadly sharks will have learned to overcome their one limitations; land.

Science, the media, the shadow government and arcane mystical secret societies have known of the dangers of Megalodon for a long time, but have strived for millennia to keep its existence hidden. This cover-up (like many cryptids) has been of supreme importance to these inter-connected agencies, usually listing this particular monster near the top of 'Sh*t We Need to Keep the Lid On*' in their publicly-available promotional material, (often adding 'For Serious, Guys, We Don't Want This Getting Out. Looking at You, David!'). Keeping this information is so vitally critical, they keep it on the 'Mega-Low-Down'.

Sharks are actually endangered now thanks to humans hunting them in record numbers to turn into guns. 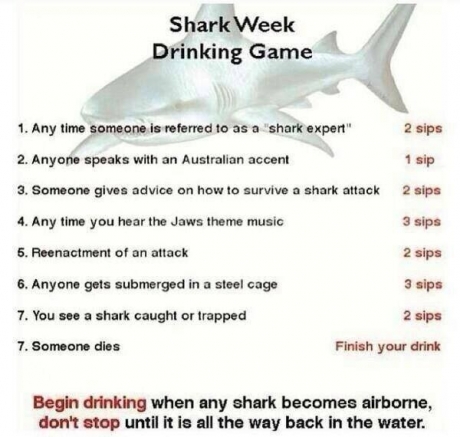 Retrieved from "https://revengerists.fandom.com/wiki/Sharks?oldid=17062"
Community content is available under CC-BY-SA unless otherwise noted.