Start a Wiki
What the hell is with Spider-Man? Aside from the costume, which I won’t even get into, what kind of powers are those to fucking have?

Do spiders really have the ability to sense things before they happen? I don’t know any that did before I squished their asses. There’s a good villain for Spider-Man; the Indomitable Shoe, or Rolled-Up Newspaper-Man, or (and this is my favorite), the Aerosol Avenger. Now, a fly I could buy, because they always jump away before I can fucking squish them. But spiders are slow as all hell. If Peter Parker Man could get over the whole nice-guy thing, he'd make a better Spider-Man.

On that note, since when do spiders have super-agility? Aren’t they fairly slow-moving? They don’t have to move fast, their prey gets stuck to their web and then they can take all the fucking time in the world getting around to eating it. It’s like a fucking roast just walks in your house and asks if you’re hungry.

“That’s cool, I’ll just wait in the fridge until you feel peaked.”

See? No agility required. Okay, fine, spiders need to be able to balance on their webs, but doesn’t that come down to the wall-crawling more than anything else? They don’t get stuck in their own webs, and they use the little fibers on their legs to traipse about them.

To be thoroughly accurate, a real Spider-Man would just web every bank in New York, wait, and then eventually catch himself a villain. Then, he wouldn’t just leave them for police, but suck the juices from their bodies, the marrow from their bones, and leave an emptied husk to confuse the coroner.

And why the hell did he become all buff? Spiders aren’t buff! They have a giant fucking rear end! In reality, Peter Parker wouldn’t have had to throw away his glasses, he’d have to get three more pairs for his eight fucking eyes.

Oh, and for people who take the movie as gospel, let me tell you something; that webbing wouldn’t really come out of his hands.

Don’t give me that crap about him actually becoming a spider for a short time, because I read the Man-Spider saga, and it was lame. L-A-M-E.

And I don’t buy this whole ‘radioactive spider’ thing. Yeah, okay, fine. Change it into a DNA thing for the movie and the Ultimate Spider-Man series. I still don’t buy it. In fact, I’m more offended now that you’re trying to make it more scientifically viable, and its total bullshit. Last time I checked, DNA doesn’t get transferred from one species to another, otherwise there’d be a lot of half-human, half-sheep out there looking for child support.

At least a radioactive spider was campy. Back in the sixties, everything was radioactive. The Hulk, the cosmic rays that changed the Fantastic Four, even kryptonite radiates and harms Superman. I’m sure there’s some way to get the Green Lantern in on this, but I never really read that because it was crap, too.

A virus, now, that would explain it. Maybe some mad scientist (as they’re always a staple of comic book literature), injected his spiders with a disease that, if they bite a human, they get freakin’ spider-powers. Why? I don’t know, maybe he wanted to inject it into himself but then a freaking tour group of college students interrupted him. What, mad scientists can’t give tour groups? Okay, maybe it was a mad janitor. And he did it just to be mad. Do not question his methods! He will mop you!

Viruses explain everything! Vampires, zombies, werewolves… You know what Captain America got? A serum. A chemically manufactured and not biologically random injection. They created something specifically for the purpose of making him stronger; and that’s believable because I could actually see our government doing some guinea pig type shit for the sake of a military endeavor. Badass Sam Elliot in between Hulk-busting, trying to develop a super-soldier. Then it gets stolen, industrial espionage, happens every day.

Spider-Man? Gets bitten… BITTEN, by a spider who just happens to have been randomly altered or randomly fried by some random radioactivity in which its body randomly reacted by making its blood some sort of human-DNA-changing engine. Was it an all-encompassing DNA catalyst? I mean, had the spider bitten a cat would the cat walk up on your ceiling and then spray webbing out of its ass? And by the way, spiders don’t inject you with blood, they inject you with venom. Venom is not blood. What, in fucking hell, does a spider have to gain by injecting its prey or an attacker with its blood? And, in nature, if the spider-DNA infected its predator or prey as it did Peter Parker, that would only disadvantage the spider. “Oh, shit, I just gave this predator that’s attacking me, or prey that I plan on eating, all of my powers in addition to whatever it had before. I’m fucked.” If anything, a spider would develop, through DNA enhancement or radiated whatever, an ability to steal other peoples’ DNA. If the spider suddenly learned to talk, maybe, but not when it gives a human a useless injection of blood.

Sure, maybe there was blood in the spider venom. I mean, he was fucked up. He was traumatized by radiation.

I bet if I stepped into the path of some gamma rays I’d be spitting blood with my saliva, too. What they don’t tell you about Bruce Banner is that he shits green blood at least twice a week.

Let me go off subject for a second here and talk about Venom. Venom is awesome. I buy it. You try to explain to me, in Earth terms and scientific methodology, how a burnt spider, who just happened to survive a radioactive blast, imparts his genetic makeup onto a human being, and I cannot accept that. But you say, oh, some alien with incredibly adaptive abilities copies the superpowers of another, and, as it seeks a new host, takes those remembered powers with it, then I buy that. You know why? Because I have no reference for it. There aren’t any aliens coming down all offended and saying, “No, it would never happen that way.”

Whereas, I’ve micro-waved spiders. I know they don’t survive.

You know what else is great about Venom? He straight kicks ass, yo. He won’t leave your criminal ass for police to find. In fact, if somebody ever did find your ass, or any other part of your body for that matter, then Venom didn’t do his job correctly. He could have killed Spider-Man years ago, and would have too, buy they have some deal going on or something. A respect issue. Yeah, you fight crime too, I’ll let you go. You helped me stop Carnage, I’ll let you live... For now. And then Peter Parker’s all like, Gee, I wonder if it was a mistake to let Venom go. Bitch! He let you go! What were going to do? Take a picture of him? Okay, fine, you tricked him with the sound vibrations once.

But you can’t trick Venom again. 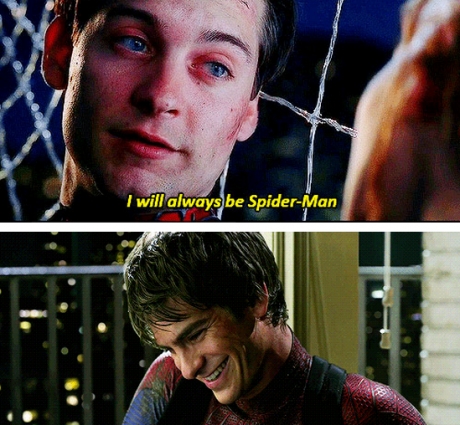 Let me quote president Bush here; “Fool us once, shame on you… fool us twice… uh… you can’t fool us a second time, that’s just the point. It ain’t happenin‘.”

Douche! He knows your secret identity! Your secret identity. You know, the thing you told Mary-Jane, Dr Octavius, Harry Osbourne and your fucking landlord, I’m sure. The thing that Robbie Robertson and Aunt May have figured out because it’s not real freaking difficult when your job is to take fucking pictures of yourself. “My, what a lovely shot of Spider-Man’s crotch, however did you get it?”

I tell you, if Venom or Carnage really wanted to fuck Spider-Man up, they could and all he’d be able to do is sit in a corner with his little web shooters all ready, which they can tear through like butter, and pray because they don’t set off your precious little spider-sense.

It seems to me that having spider-sense would be a very useless thing to have.

Let me support that; You see, Spider-Man, in the comics, would get his flashy little squiggles around his head anytime anything bad was about to happen. However, he didn’t know what form the bad thing was going to present itself in. It could have been a super villain, or a flood, or a burglary, or perhaps simply a punch in the face. But since you don’t know what it is, who really fucking cares that you’re going to know something is going to happen sometime. That’s like paying money for a psychic to tell you that, someday, in the future, you may possibly die. 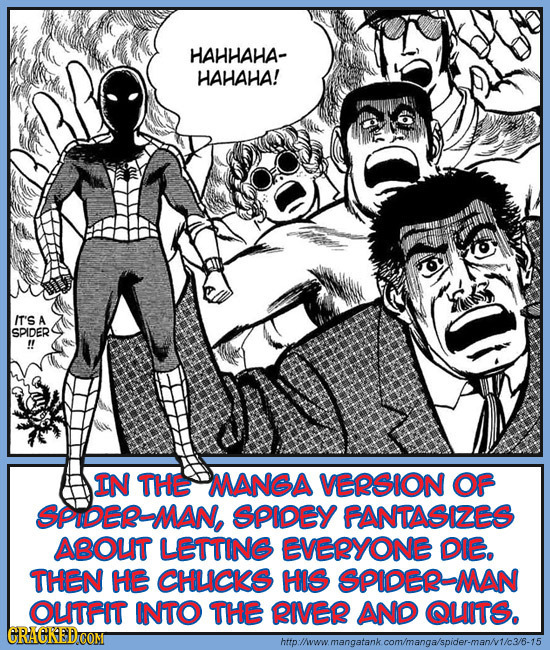 Now, granted, this gives Spider-Man the advantage of being prepared for something. No enemy can really get the jump on him, because ten or twelve seconds beforehand, he knows, shit, something’s going to go down. In the comics and in the cartoon, immediately after he would see what it was that was going down, like a fire or the green goblin flying by. But, this doesn’t really prepare him for anything. Just because you know something is going to happen to you, it doesn’t really help when eighty pumpkin bombs are suddenly falling from the sky and decimating the roof you’re on.

Also, I’ve seen Peter Parker get the spider-sense for extended periods of time. He’ll be at a fancy party, or a press conference, or a gala event, some other photo opportunity for Jameson’s rag, and for like a solid twenty minutes his spider-sense is buzzing saying, listen! like that Goddamn fairy thing in Zelda 64. Then he gets all paranoid and starts looking all over the place for something that could be wrong. What, is the scaffolding going to fall down? Is the Shocker or some other 80’s reject villain going to jump into the building via the nearest window, with his goons in tow, and raise some hell? Granted, it gives ole Pete time to do a wardrobe change, but this never seemed like a problem for him anyways. All it would do for me is equal a great big headache and possible a trip to the insane asylum for worn-out superheroes. 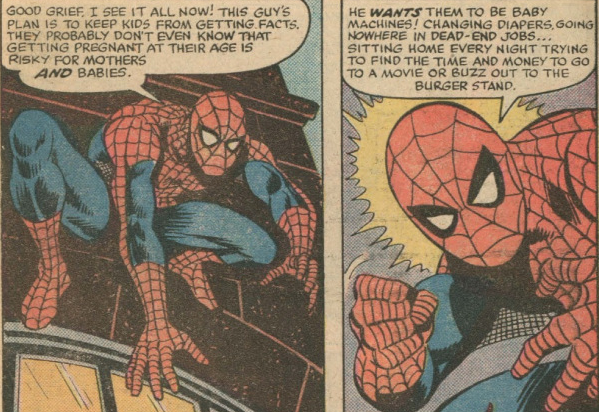 Okay, I know what you’re thinking. In the movie, Pete was able to duck Flash Thompson’s fist, and catch Mary-Jane when she fell down with a tray of food, then catch all of the things on her tray. Alright, I’ll give you that. But that is a distinctly different power. Those are spider-reflexes. When you see somebody fall out of the corner of your eye, or you see a fist coming at you, or even the Green Goblin’s glider, shit, yeah, move out of the fucking way. I mean, you’re fast. Jump, idiot.

But that’s not the same thing as just having flashy squiggle things rotate around your head and you suddenly know, damn, it’s time to duck.

I mean, what the hell is that!?

So, in conclusion, Captain America rocks, Venom rocks (even if he was just a $200 idea), and Spider-Man can take a giant metallic Octopus tentacle up the ass for all I care.

Spider-Man got his name from a guy named Peter Spiderman

Retrieved from "https://revengerists.fandom.com/wiki/Spider-Man?oldid=16811"
Community content is available under CC-BY-SA unless otherwise noted.