The Revengerists Consortium of Stuff Wiki
Register
Don't have an account?
Sign In
Advertisement
in: Awesomes, Mutants, Ninjas,
and 6 more

They're the world's most fearsome fighting team, they're really hip! They're heroes in a half-shell and they're green, get a grip! When the evil Shredder attacks, these Turtle bois don't cut him no slack!

Splinter taught them to be ninja teens, (he's a radical rat)! Leonardo leads, Donatello does machines, that's a fact, Jack! Raphael is cool but crude, Michaelangelo is a party dude!

The rat, named Splinter, was the pet of a skilled ninja warrior, and studied his fighting technique for years. After his masters death in battle, he escaped to the sewers where he found four baby turtles, this group of four turtles and a rat, were exposed to a highly effective mutigen, colloquially known as "the ooze." Any creature that is exposed to mutagen will rapidly increase in size, strength and intelligence, and possibly gain other super-er powers. 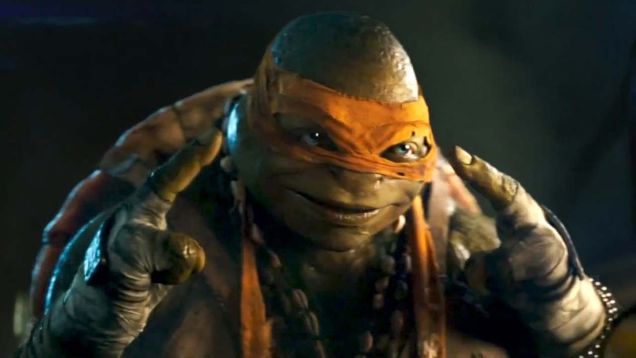 Ninja Turtles have shells that they can pull their heads into, despite this seeming impossible. They sometimes have iris/pupils, and sometimes not. They have humanoid musculature, often rendered very strangely or senselessly (or sensuously). They definitely have lips.