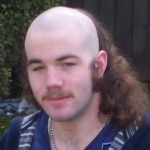 It was another typical day in junior physics class at Point Cordial High, when things took a turn towards... the atypical! Mild-mannered Breshvic's seething distaste for physics had broken through its last tensile straw, and the very fabric of spacetime that held this particular entity in place with the rest of us tore like the flimsy wet blouse of an amateur porn artist! Young Breshvic found himself disembodied, floating wildly in a place with no shape or form, but more directions than previously revealed to him, and not easily explained in this format! Had he gone to that ethereal void of wraiths and gods? Had he crossed over to the land of the dead? HAD HE GONE UTTERLY MAD? Had he simply fallen asleep during another lecture? NO! It was in this astral plane between reality and dream, a nexus of dimension, the OMNIVERSE, that Breshvic first learned to use his powers! Here, clawing madly to survive from nightmare demons and malevolent cosmic shadows, he grasped just how useless and futile our knowledge of "physics" actually was!

Gravity had no bearing on him or his surroundings as he supposed them! What went up need merely to stay there! He was certain of the exact position and momentum of particles at the same time! Matter could be created and destroyed at will! Two objects could occupy the same space at the same time! No longer would one action have an equal and opposite reaction, sometimes it would just pout in a corner or mutter under its breath! Space could not restrain him! Time could not contain him! He could shift from the physical to the realm of mere photon.. of dream.. of thought... of light!

His cat would be free from worry in the face of decaying atoms! (But sadly, not acute kidney failure.)

But this new playground was but to spoil him. For back in his home reality, the powers that he had developed now for eons (but to the base physical world mere fractions of a second), would bear devastating consequence. He would have no choice but to lead a normal life, unadorned by abnormality, lest the fetters of science be undone, lest the cosmos be sundered in TWAIN!

So, after an epoch of meditation and exercise in restraint, he returned to the very moment of his departure, and gasped his first breath ANEW! There, in that vessel, his god-like powers remained dormant! A wayward traveler in the Omniverse one moment, a shiftless anxious physical animal the next. But for the occasional telekinesis, time clock fraud, and spontaneous combustion of stuff with his mind, Breshvic kept his powers absolutely mute for that one day when the fate of the Earth would call... and leave its name and number, and reason for calling... and maybe... just maybe... he would get back to them.

Oh. And I'm definitely NOT a werewolf. Just wanna be clear on that.

Retrieved from "https://revengerists.fandom.com/wiki/User:Breshvic?oldid=16810"
Community content is available under CC-BY-SA unless otherwise noted.