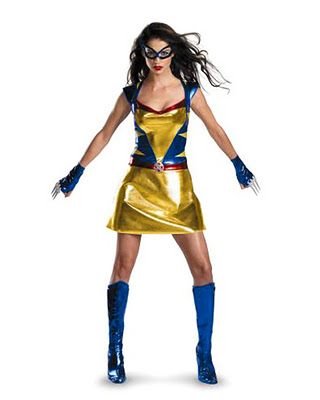 Wolverine is a post op transexual who frequents bars in West Hollywood, California.

Wolverine used to be a man named "Logan." He loved men so much that he seriously considered a sex change, but was hesitant. After years of slutting his way through the second largest gay community in California, he was on his way to an after hours Circuit Party when he was attacked by a mob of boys he had blown off a lot. He was subsequently berated and flogged with nasty vocabulary. Afterward he was sitting on a bench, crying, but a man saw him and asked him "Are you okay?" To Logan it was the sexiest man he had ever seen.

He tried his best to seduce the man but the guy was into more feminine men and also women since he was bisexual. This triggered Logan's mutant transformation.

He started shopping for women's clothing, underwent the estrogen treatments, and signed up for breast implant surgery. The day came and he had his surgery, afterward "she" got breast implants. It was all going according to plan, but something went wrong. "She" was still growing massive amounts of body hair despite the estrogen treatment. This was pointed out one night by the same man that "she" wanted. The man told "her" that it was a lot of hair, Loga (previously Logan) was enraged and stomped on the guy's foot with high heel shoes. The guy called Loga a "Wolverine" because "she" was so feisty.

Wolverine was then known around the community as Wolverine, the nasty bitch.

Wolverine has the standard skills and powers of any post op transexual. She is capable of dressing and appearing to look like a real woman, but is less able to than successful post ops. She still holds her strength from her past as a man, she still works out so she's got muscles. She's also capable of fooling drunk straight guys into thinking that she was not a man, but anyone who isn't at least heavily tipsy will know.

Loga's healing factor is very painful, and in a constant state of trying to grow back a penis, which she cuts off with razor sharp claws also added by the insane surgeon who performed her gender-reassignment.

She is capable of growing a lot of body hair, this scares off people who are not attracted to that. It is known as scare factor.

A power that makes Wolverine unique is her "Heeling Factor." Since the high heel stomp, Loga now shops for shoes with varying heel sizes. She has thick heels, thin heels, spikey heels, and super high heels. The heeling factor causes her stomps to do various types of damage (blunt, piercing, cutting.) She considers this before every club outting and wears heels accordingly.

When Wolverine was a young'un he had admantum bones, a material which was like normal bones, but not like normal bones at all. The Organization X kidnapped him and infused his admantum bones with normal bone, making his bone structure harder than normal and inserting razor sharp claws into his forearms. The Wolverine can use these bone claws to cut things with them. They also inserted silicon boobies and pasting of lady bits.

Wolverine is often seen eating raw meat and making rude comments to members of every sex. Wolverine traveled the world, living many lives in Canada, America, and Japan, in every decade for centuries until finally joined the X_MEN! They are a sad bunch and fit in quit nicley.

Retrieved from "https://revengerists.fandom.com/wiki/Wolverine?oldid=11064"
Community content is available under CC-BY-SA unless otherwise noted.