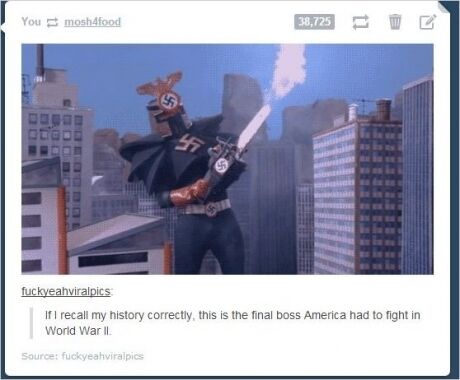 World War 2 is the sequel to The Great War (later renamed World War 1) The Germans, recovering from their previous defeat, were cheesed off for having to pay back everybody for the stuff they wrecked. During this moment of screwedness, they were taken over by the Nazi Party's campaign of fear and intense nationalism, and a cult-like fervor for the fuhrer. The world felt kinda weird about making the Germans pay for everything, so they kinda just let them rebuild and do wtf they wanted, the nazis had the world's support because everybody else just thought the nazis were a regular political party, but the truth is they were led by deranged cultists. They learned dark secrets and sold their souls to invent superior killing machines from flamethrower chainsaws to laser teeth, and used them to scare people more efficiently. So Germany decided to bring back it's team from the first war (the Central Powers) but nobody else wanted to make Empires anymore because Countries were the cool new thing. This made Germany mad, so they started a new team: The Axis Powers, but everybody knew how jacked up Germany was after the first war so they only got Italy and Japan to join them, and only after agreeing to make them honorary Aryans, which was kinda dumb because even the Germans weren't even actual Aryans. Germany invaded Poland and a bunch of other countries that used to be part of their empire and pretty much took over even while facing great resistance. But most of Europe that wasn't being taken over was cool and just said "keep that shit over there, away from us" The entire time this was happening Germany was blaming all it's problems caused by getting their asses handed to them in the first war on everybody except the Germans, namely Jews, communists, homosexuals, and anybody else they deemed inferior, in that order. They started secretly shipping them and other prisoners to concentration camps, labor camps, and eventually death camps. Nazi mad scientists experimented on their prisoners to learn new improved ways to kill, and tried to make an entire "race" of Aryan Uber mensch

The Axis Powers eventually spread to giant swaths of Europe, Asia, and Africa, meeting with resistance everywhere they went, but not too much coz they stole a bunch of shit to bribe corrupt politicians and shit. They searched every corner of their conquest for even more dark or arcane or occult knowledge to support their theories and advance their "cause." but all this expansion was making battles all over the place like bang bang bang boom boom bang crash phew chaka-chaka-chaka kablooey, and this sucked so everybody joined into the allied forces to fight back together. The US was pretty OK with all that,

Everybody bombed the fuck out of Europe and blew up a lot of cool old stuff and books and shit, and everything that wasn't messed up was stolen or hidden away somewhere safe. The Pacific was all bombed to hell too, and American scientists obliterated a few islands testing nuclear bombs.

Eventually the nazis were defeated,

To make the Axis powers defeated, the Allies fight with all muscle strong and bang boom chakka-chakka-chakka, and this worked, but not fast enough so the US dropped 2 nuclear bombs an Japan and killed a ton of regular folks, doing their part in their society, and knocking over a couple factories and both towns.

led by Adolf Hitler (more like Adolf Quitler, cuz he committed suicide all the time) a syphilitic failed artist interested in incest and racial genocide, with paranoid delusions

Retrieved from "https://revengerists.fandom.com/wiki/World_War_II?oldid=21105"
Community content is available under CC-BY-SA unless otherwise noted.